When my relatives were e-mailing about who would bring what foods for Thanksgiving, I wrote, “Ken and I will bring squash. And probably greens. And probably one lacto-fermented vegetable or another. Hmm, I wonder how many kinds of squash I can feed you? Five?” To my surprise, several relatives chimed in asking for more kinds of squash. In the end I brought nine squash, all different kinds, from our trials.

My dad used half the Thai Rai Kaw Tok pumpkin, half the Thai Kang Kob pumpkin, and half the Sucrine du Berry to make pumpkin pie. Some guests joked about how it was a squash pie rather than a pumpkin pie, but in fact very many pumpkin pies have a higher proportion of non-pumpkin squashes than this one did.

On Thanksgiving afternoon the oven was too full of free-range turkey (from J. and L. Green Farm, run by former interns at Polyface) to fit any squash in. So I hosted a Squash-athon on Friday. I baked the three halves left over from the pie, as well as a Shishigatani, a Futsu, a Canada Crookneck, and, from the farmers’ market my parents visit, a Buttercup.

All but the last of these are in the Cucurbita moschata species. Buttercup is a Cucurbita maxima, and I wanted to roast it mostly because it would be the first time I’d eat a maxima and know that it was a maxima. Squash vine borers make maximas much harder to grow in our region, so our farm we generally don’t plant them. But as a species, they are renowned for tasting great. On the other hand, I didn’t roast either of the two Cucurbita mixta squash I had brought, because these were too large. (There are some mixtas in the upper right of the photo above.)

I enjoyed the Buttercup, and so did several others, but I was surprised that my sister did not. She compared it to a potato; I compared it to the egg fruit we’d eaten in Hawaii. I found it dense, rich, and much more filling than other squash I’ve had. The mixta species, I have found, also has its own distinct taste: appealing but mild, a bit more reminiscent of summer squash than of moschatas or Buttercup. 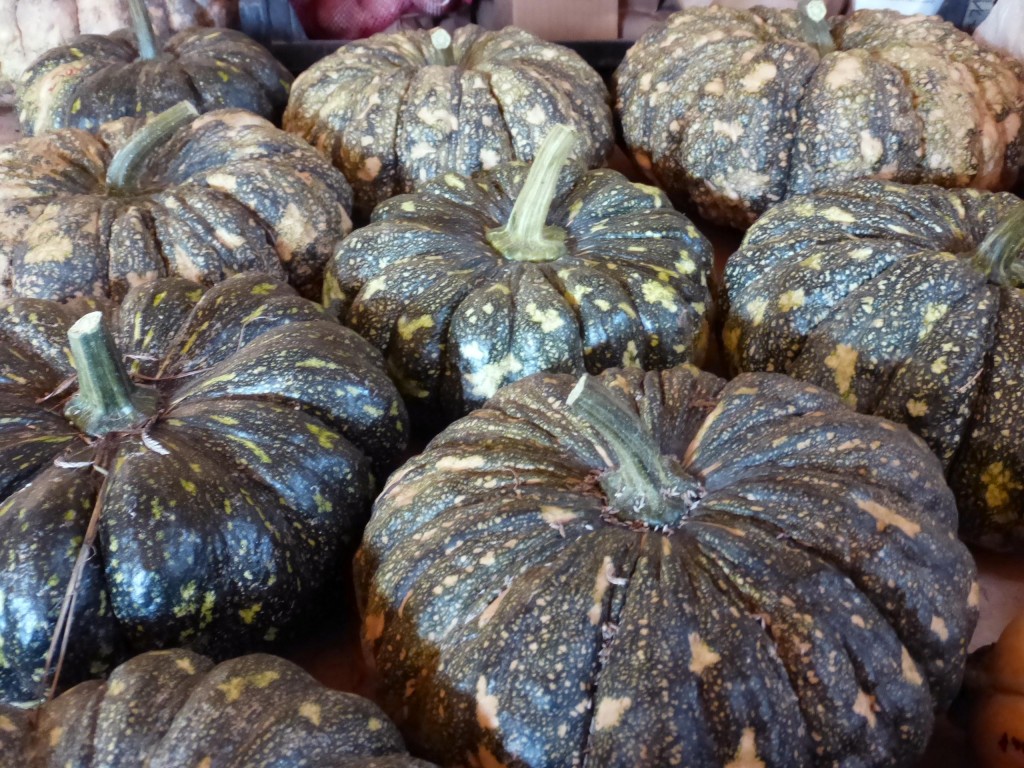 Of the moschatas, Thai Rai Kaw Tok (pictured above) and Thai Kang Kob took the cake. They were denser and more flavorful than the competition. They were also surprisingly different from one another in taste, with Thai Kang Kob having a strong traditional squash flavor, and Thai Rai Kaw Tok having a spicier, more complex flavor that I think is more typical of the squash I’ve eaten in Thailand. Both Thai squash had better yields than most of our trials, and Thai Rai Kaw Tok had the best yield of any moschatas we grew this year. So this winter, when we send our seed growers the list of varieties we’re looking to have grown in 2014, Thai Rai Kaw Tok is very likely to be on that list. With any luck, we’ll have it for sale in 2015.

After eating only squash for dinner, I was surprised to find myself not just full, but completely satisfied. My mother had asked about the water in the bottom of the squash baking pan, then poured it into a glass and drank it as we ate. She said she felt completely satisfied after a meal of only squash water! My sister got out some crackers and cheese, but no one ate much of them. No one prepared or suggested any significant second dish. No one said that the meal was monotonous or too simple. And I didn’t even add any seasoning.