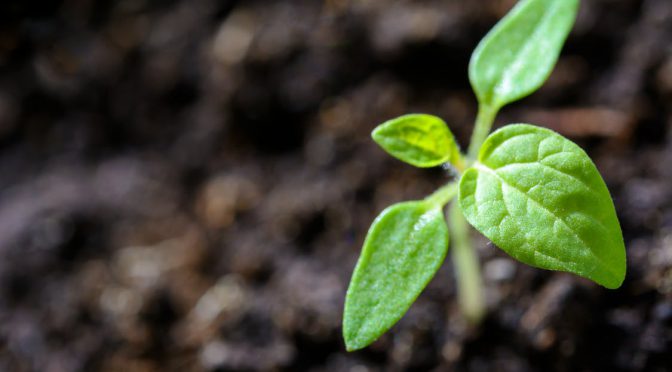 Healthy, productive plants start with healthy soil. One way to look at soil health is through the soil food web. It’s similar to a food chain but it’s non-linear. For example, earthworms consume decaying plant material but plants also consume the nutrients in worm castings. In a food web, there’s back and forth. Plus, many organisms don’t rely on a single food source. A food web is made up of plants, animals, and all the organisms in the soil from visible insects and fungus to microscopic bacteria. A healthy soil food web is key to a healthy garden and ecosystem.

The soil food web can be looked at in trophic levels.

The first tropic level is made up of the primary producers that photosynthesize, using the sun’s energy to fix carbon dioxide from the atmosphere. These producers include plants, shrubs, trees, lichens, moss, photosynthetic bacteria, and algae.

This level is made up of decomposers, mutualists, pathogens, parasites, and root feeders. These include nematodes, fungi, and bacteria.

The third level is made up of shredders, predators, and grazers. Shredders include anthropods like earthworms, leaf-eating insects, and millipedes that break plant material down into smaller pieces. Third level predators include nematodes and some protozoa which feed on fungus and bacteria. Grazers are also composed of different types of protozoa.

The fourth trophic level includes predatory anthropods and nematodes that eat other soil organisms. These include beneficial garden insects like predatory wasps and beetles.

These levels are made up of higher-level predators; birds and animals that consume other organisms.

A complex and diverse food web is a healthy one. Here are some steps you can take to increase your soil food web’s complexity.

If you garden on a large plot, breaking it up can increase the number of anthropods present in your soil food web. This can be done through the use of permanent vegetative pathways (clover is great for this) or hedgerows within your garden.

Tilling is detrimental to protozoa and fungus and can create an unbalanced web. Using reduced or no-till methods can increase the diversity of helpful bacteria, fungus, and protozoa present in the soil.

Keeping soil covered can also increase fungal, bacteria, and insect life. This can be achieved through the use of cover crops and mulches.

Studies have shown that fields with 4-year crop rotations have more beneficial fungi and bacteria than those with 2-year rotations.

Pesticide use significantly decreases the number and diversity of a wide variety of soil organisms. Having healthy soil and therefore healthy plants can help prevent the need for pesticides in the first place.

A healthy soil food web is important to climate change mitigation. Plants take in atmospheric carbon in the form of carbon dioxide and add carbon to the soil. In a healthy ecosystem, it’s used in the soil by fungus and bacteria where it can remain for hundreds of years!