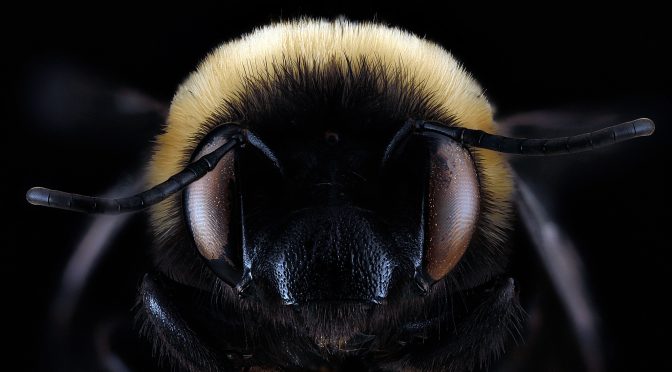 Did you know that honeybees aren’t native to the United States? They were brought from Europe by colonists in the 1600s. Don’t get me wrong, I still love honeybees. Local honey is an amazing sweetener and they do a great job pollinating a lot of our crops. However, native bees are awesome too! Some studies show they may do a better job of pollinating native American plants like tomatoes, beans, and squash. Sadly, many of them are struggling. Check out these five bees native to the southeastern U.S. and consider using practices that support them.

These metallic little bees can be found in North Carolina south to Florida. They are generalists when it comes to foraging and utilize and pollinate a variety of species including those in the aster, clover, and raspberry families. They nest in relatively small ground burrows.

In the southern part of their range like Florida, they are active year-round. In the northern reaches, they’re typically only active between April and September.

They also differ from the honeybee in that only a solitary queen overwinters. In spring she emerges from hibernation and selects a site for an underground nest (often a small mammal burrow) where she lays her eggs. She guards the nest, forages, and tends to the larvae until some workers mature and begin helping forage for food, tend the larvae, and protect the colony.

These bees are generalist foragers and will utilize pollen from a variety of plant species. However, they are often some of the first bees to emerge in the spring and the last to hibernate in the fall meaning they need a diverse supply of blooming flowers.

The Rusty Patch Bumblebee is severely endangered. It’s estimated that its population has declined by 87% since the 1990s and it now covers just 0.1% of its historical range! In the Southeastern U.S., its range as of 2000 included Virginia, North Carolina, West Virginia, Pennsylvania, and Maryland. Its historic range extended though the Northeast and South to Georgia.

If you have property check out the U.S. Forest Service Conservation Management Guidelines for this species.

This bee rockstar is the most active February through April. As their name suggests, these bees primarily forage blueberries. They’re much more effective at pollinating blueberries than honeybees and can improve yields. They’ll also visit Eastern Redbud, Azalea, Clover, and Trumpetflowers.

They excel at early spring pollination because they can vibrate their wing muscles to warm up and fly before temperatures reach 60°F. They’re solitary ground nesters though the nests are often found grouped. The female bee builds a tunnel in sandy soil and brings masses of blueberry pollen. She lays one egg on each mass which will hatch the following spring.

Subspecies of these bees are native to both the eastern and western U.S. and are very important to commercial agriculture. These bees are more efficient at pollinating native crops than honeybees and are important for fruit orchards as they’re active in the early spring.

Blue Orchard and other mason bees are solitary species that use existing cavities to nest in like those in reeds and hollow plant stems. Unlike carpenter bees, they cannot drill into wood. These species benefit from manmade insect hotels. Like the Blueberry Bee, these bees bring masses of pollen into their nest and lay a single egg on top of each mass where they remain until the following spring.

Another ground nester, the Two-Spotted Long-Horn Bee is a solitary species that will sometimes nest close together. Their name, “long-horn” is derived from the males’ long antennae.

They’re found throughout the eastern U.S. and are broad generalists. They’ve been seen foraging from clovers, asters, impatiens, monarda, rudbeckia, mints, asparagus, and dozens of other species.

There are many ways to help these incredible insects even if you don’t have a lot of land.

Letting your lawn get tall and flower can help native bees and native herbaceous plant species to thrive. Let it grow as tall as you can if you’re dealing with restrictions.

Talk to Your HOA or city council about pesticides.

If you live in a more rural area just bring it up in conversations with friends and neighbors. Many folks don’t know about the harmful affects certain garden products have on bees.

Even if you don’t have a lot of land to create bee habitat you can vote with your dollar. Supporting farms that prioritize bee health is just as important as what you do at home. You can also look for farms with a BFF (Bee Friendly Farming) certification.

Planting flowers is great but it’ll have a much bigger impact if you select species that are native to your area. Native species are what native bees have adapted to over hundreds of years of evolution.

Also, try to select flowers that have a variety of bloom times. This helps different species of bees and ensures that those who are active for a long period like the Rusty Patched Bumblebee make it through the entire season.

There are many of mason bee species native to the southeastern U.S. that play an important role in pollination. You can give them a helping hand by providing them with nesting habitat in the form of a DIY insect hotel.

Especially if you have a large property try to leave a portion of it wild or as wild as possible. Don’t clear undergrowth from the forest, leave standing dead wood, avoid raking up fallen leaves and branches, and don’t mow.

Also, be smart about your garden clean up. Many dry plant stalks still standing in the fall may be filled with bee eggs and other beneficial insects. Let them overwinter so they’ll hatch in the spring!