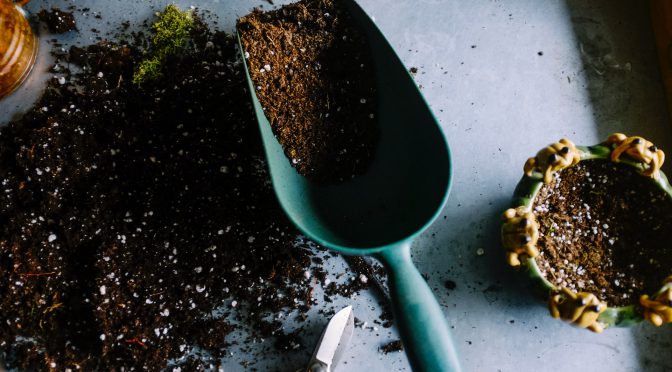 Like many aspects of gardening, potting soil, or potting mix is something you can DIY. Making your own can allow you to select and avoid certain ingredients, customize a blend for your specific plants, and potentially save money.

A potting mix or potting soil should be different than regular garden soil in a couple of crucial ways. First, it should be well-draining. This is key to prevent plants’ roots from being water-logged in potted situations. A potting mix should also be lightweight and consistent.

There are many ingredients available for potting mixes. What you select will depend on what you plan to use your potting mix for and your personal preference.

Peat moss is the main ingredient in most potting soils. Though it doesn’t offer a lot of nutrients, it provides structure, is well-draining, and holds moisture well. Peat moss is on the acidic side, so it’s a good idea to use it in conjunction with limestone.

Unfortunately, peat moss may not be the most sustainable choice. It’s not like the moss that grows in your local woodlands. Peat moss forms over thousands of years from plant material (including moss) submerged in wetlands. As these wetlands take so long to regenerate, many consider peat to be a non-renewable resource.

Coir fiber or coco coir is sometimes used as an alternative to peat moss. It can often be found in compressed bricks and is made from the husks of coconuts in a process called defibring. Unfortunately, it can sometimes be pricey.

While some may disagree, compost may be the most important ingredient for many potting soil blends. In fact, a fluffy, well-aged, screened compost can be used for seed starting all by itself.

It may look a bit like styrofoam, but perlite is actually a natural, non-toxic ingredient. It’s a type of volcanic rock that expands when it is heated. It improves drainage and can hold and slowly release water.

Like peat, perlite may also have some sustainability issues. Perlite is typically strip-mined in the United States, China, Italy, and Greece.

Sand is good for creating well-draining potting mixes like those for succulents and cacti. You can use fine or coarse sands depending on what you’re growing.

Similar to perlite, vermiculite is a type of stone that’s a good addition for creating well-draining potting mixes. It also adds magnesium and calcium to the soil.

There are a variety of fertilizers and amendments that can be used in potting soil. Kelp meal, bone meal, and slow-release chemical fertilizers are common choices.

These are more important if your plant is going to be in a container long-term. For example, you grow tomatoes in containers on your patio. If you’re just starting seeds, the fertility in compost should be more than enough.

These ingredients are better suited for potting mixes used for larger plants rather than seedlings. They help hold moisture and aerate this soil. However, these can lock up nitrogen while they decompose so it’s ideal to add a bit of fertilizer like kelp meal if you’re using one of these.

When selecting ingredients, you’ll want to consider what you’ll be growing. For starting seeds or propagating cuttings, you’ll want a mix that’s fine-textured, light, and fluffy. If you’re potting up larger annuals or perennials like fruit trees, it’s okay to use a coarser mix. For potting up dry climate plants like cacti and succulents, it’s a good idea to create a well-draining mix.

Here are a few sample recipes you can mix up at home. Feel free to play with ingredients. There are no correct or incorrect recipes, just what works best for you and your plants.

There are two recipes you can use to start seeds. If you have a tendency to overwater you may want to use recipe two.

I’ve found that stirring these up in a wheelbarrow is one of the easiest ways to blend the ingredients and allows you to do big batches.