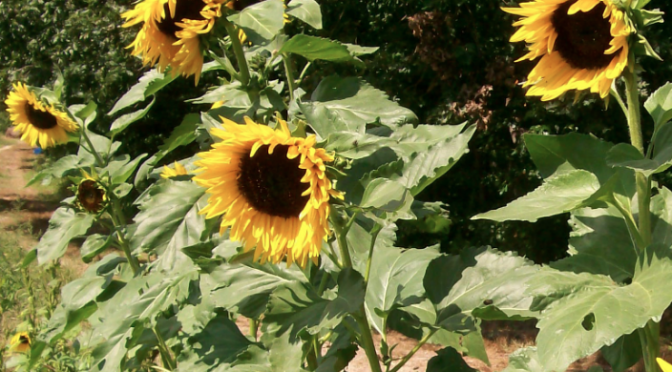 If you grow sunflowers the garden looks a little extra magical this time of year! There’s just something special about these big flowers that follow the sun. Today, they are a popular crop for home gardeners and rank among the world’s most important oil crops but they’ve got a really long and interesting past too.

Sunflowers were first cultivated by Native Americans. Some archeologists believe that they may have been grown in what’s now Arizona and New Mexico as early as 3000 BC. The seeds were an important food source and were used in a variety of ways including for grinding into flour, mixing with other vegetables, and squeezing for oil.

Sometimes sunflowers like the Hopi Dye Sunflower were also used to create dye for textiles, baskets, and body painting. They were also used medicinally and the stalks were sometimes utilized as building materials.

To Europe and Back

When Europeans came to America they quickly brought the sunflower back to Europe (probably around 1500). It was primarily grown as an ornamental until it became popular in Russia as an oil crop. During the early 1800s, it was commercially cultivated in Russia with more than 2 million acres planted each year and new varieties being bred.

Some of these new varieties like Mammoth made their way back to the United States to be featured in seed catalogs by 1880 and are still around today. They were most likely brought to the U.S. by Russian immigrants. In the early 1900s, sunflowers quickly gained popularity as oil and silage (animal feed) crops in the United States and Canada along with their ornamental use in the home garden.

As the title of this post suggests, sunflowers are a wonderful edible flower. It’s not just their seeds that are edible either. Very young plants as well as sunflower sprouts are excellent in salads and wraps. The flower petals, though they can be a bit bitter can also be used sparingly in salads to brighten things up or as natural decorations for cakes.

The leaves and stalk can also be eaten. When harvested young and peeled the stalk is a bit like celery. The leaves should be steamed or cooked like other greens before eating to destroy irritating hairs. Unopened flower buds can be cooked and used like artichokes.

Sunflowers are best harvested when they’ve fully matured. The plant’s foliage should be yellow and the back of the flower should be yellow or brown. The petals should have fallen off and the seeds should be plump and developed their dark or striped coloring. Harvesting too early when the plant is still alive and the seeds are light-colored will probably result in immature seed.

In order to get your sunflowers to mature this long, you may need to provide them with a bit of protection. They’re a favorite of birds, squirrels, and other small animals so you may need to wrap the flower heads in mesh or cover them with mesh bags to deter wildlife. Don’t use solid plastic bags. The material should be perforated or breathable or the flower head may rot.

Cut the flower heads, leaving about 4-6 inches of stalk. Cover the flower heads with paper bags and hang them somewhere cool and dry for 1-2 weeks or until the seeds are fully dry and mature. They can also be laid out on screens if you have the space to set something up.

At this point, you can either separate the seeds or leave them on the head. Sunflowers can be hung outdoors for birds to enjoy through the winter or hung in your chicken coop for them to enjoy.

Rub the seeds off the flower head and lay flat to dry for an additional day. Then they can be stored in airtight containers out of direct sunlight. They’re ready to plant next year or roast for a tasty snack! 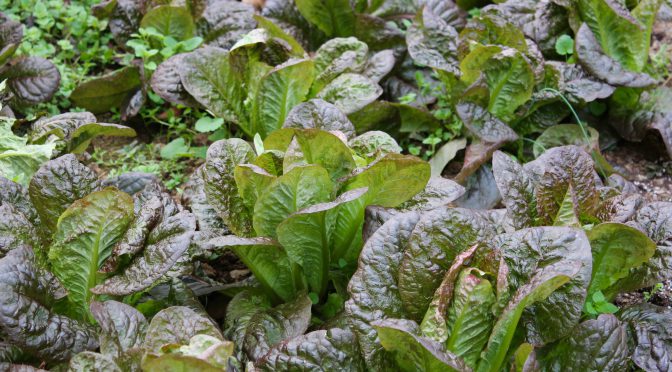 One of my favorite things about fall is that the cool weather provides a second opportunity to grow lettuces. There are so many varieties to bring color, beauty, and flavor to your autumn garden and plate. Here are some tips for starting your own fall lettuce garden.

Here are a few of our favorite varieties for fall plantings though many others will do well too.

Waiting longer to plant isn’t always a great option because as the weather cools we lose daylight. Lettuce and other plants will take longer to mature during the fall as the light dwindles.

One way to help provide your lettuce with cool temperatures is to mist the soil regularly, at least once a day. This helps keep it moist and cool, especially important while its germinating. You can also use a thin row cover or material like tulle to shade the soil a bit.

Alternatively, you can sow lettuce in trays in a cool room and transplant them later. Romaine, crisphead, and butterhead lettuces work well for this.

Lettuce can be sowed in rows or gently broadcasted. Generally, broadcasting works better for looseleaf and cut and come again lettuce mixes that will be harvested small. Broadcasting over the entire bed for these types of plantings can help block out weeds. If you want full heads of lettuce it’s typically easier to plant in rows so you can easily weed and ensure they have enough space to mature. 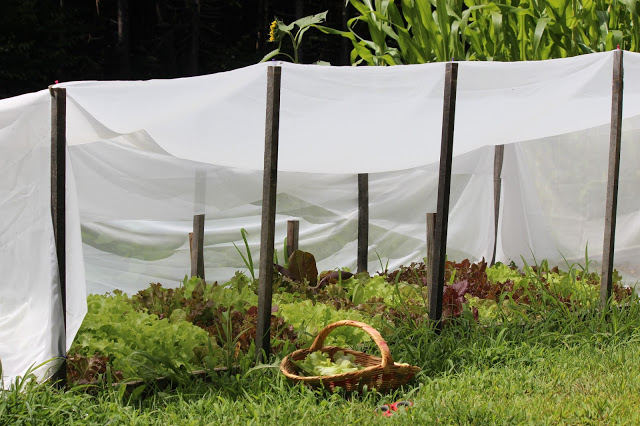 No one likes thinning but it’s critical for healthy plants. As previously mentioned, looseleaf lettuces are better suited to tighter plantings however, it’s still best if they have some air circulation. Larger, heading lettuces need more space and should be thinned to 10-16 inches depending on the variety. If you wait to thin until plants are 1-2 inches tall, they make excellent baby salad greens.

There are a number of ways to keep your lettuce garden alive later into fall and even winter. Cold-frames and low tunnels are affordable, simple to set up options. Even tulle or light row cover like we mentioned above will provide some additional protection. Check out our post, Easy Season Extension for Fall for more ideas.

Lettuce will eventually stop growing as the hours of daylight dwindle but will still provide a nice supply of fresh greens. Small, young plants can be overwintered using these methods to provide an extra early spring crop. We had success overwintering Rouge d’Hiver under row cover here in Virginia.

While the rest of your garden may wind down as we continue into fall, your lettuce and other fall crops may still require some attention. Thankfully, there should be little pest or weed pressure but your lettuce will still need to be watered occasionally. This is especially true if you live in the Deep South or your area experiences additional warm, dry weather.

If you’re growing lettuce in a cold frame or high/low tunnel covered with plastic you’ll need to be sure to open or vent them on warm, sunny days. Temperatures can rise surprisingly quickly in a cold-frame and could kill lettuce plants.

Bring a little extra beauty and flavor to your garden this autumn with a fall lettuce garden. Show us your gardens on Facebook, we’d love to see how they turn out! 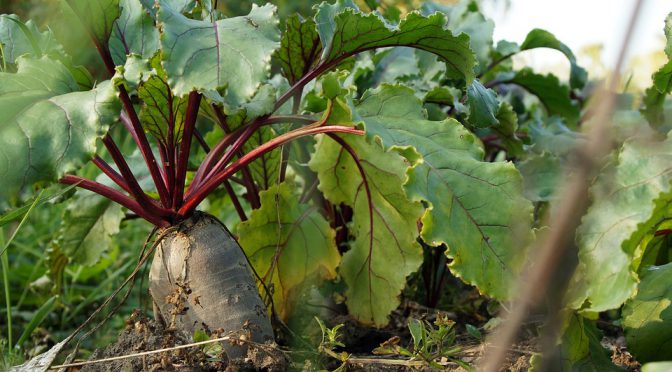 We’re starting to have some cooler nights and the hours of sunlight our getting shorter. Though the days are still hot it’s time to start thinking about a number of fall chores in the garden.

August and September are abundant times in the garden. Especially if you’re a new gardener, this season can be a bit overwhelming. Aiming to spend a bit of time 2-3 days a week will be well worth the effort this winter. Here are some recourses to help you put up your harvest:

In most of the Southeast, there’s still time to sneak in a few fall root crops. Crops like carrots, turnips, radishes, beets, and rutabagas are a great way to get a bit more out of your garden.

Season extenders are a simple way to keep your garden growing longer. Depending upon what you choose to create you may even be able to overwinter some crops. Check out Easy Season Extension for Fall and Easy, Affordable Hoop House Options.

Greens are the the workhorses of the winter garden and with a bit of protection can provide you with fresh food through the winter. Sow some this fall!

Get ahead for next season by having your soil tested now. You’ll find out what’s lacking in your soil and be able to make amendments and grow cover crops through the fall, winter, and early spring to make sure your soil is ready for next year. Check out our post, Understanding Soil Tests to learn more.

Saving seed is a great way to take your gardening experience to the next level. It’s an opportunity to begin adapting a variety to your local climate, be a little more self sufficient, and help preserve genetic diversity.

Fall is the perfect time to improve your soil’s health. Fall cover crops add nutrients to the soil and protect it from erosion during the winter and spring.

Prepare for Garlic and Perennial Onions

Later in the fall it will be time to plant garlic, perennial onions, and shallots so place your orders! While you may not be planting them quite yet, it’s also a great time to begin prepping beds. Add and inch or two of compost and fork the soil to loosen it before planting. You’ll also want to have some mulch on hand for after you plant.

When you think about fall gardening your probably think about vegetables but did you know you can also fall sow flowers? Check out Fall-Sown Flowers for Spring Blooms for ideas.

Get Your Compost Pile Ready for Winter

Making your own compost is a great way to improve your soil without spending a lot of money and reduce your family’s waste. Even if you’re new to composting, you can use the winter to start creating compost for next season.

After a long winter it can be hard to remember the details of last year’s garden. Take note of things like your favorite varieties this year and what was planted where. This will make planning next year’s garden much easier.